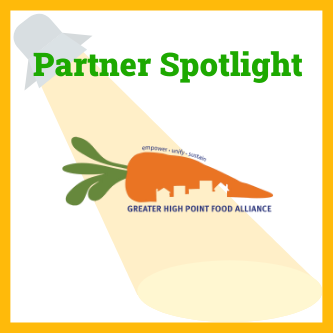 The Greater High Point Food Alliance (GHPFA) is a grassroots organization formed to address food insecurity. When it started in 2014, the Greensboro-High Point Metropolitan Statistical Area (MSA) was number two in the nation in food hardship. The following year, it moved to number one. Since that time, it has moved to number 14, according to GHPFA’s website.

“We take a collaborative approach and work with four neighborhoods. We asked them how they would solve food insecurity, and then we work alongside them to help them achieve those goals,” said Carl Vierling, the organization’s executive director. “We work behind the scenes at a higher level to connect resources to each of the groups we work with.”

The High Point neighborhoods working with GHPFA are Burns Hill, Washington Street, Highland Mills, and West End. Representatives from each area are board members, along with a wide variety of community leaders. Recently, the organization held a “Walk to the Store” to demonstrate what it would take for a person in the Highland Mills neighborhood without transportation to walk to the closest store, the Walmart on South Main Street. The route has no sidewalks and crosses Business 85.

“Many of the people that we work with are one car repair bill away from walking,” Vierling explained. “When you have to walk to the store, you have a limit on how much food you can carry, so that means multiple trips each week.”

GHPFA built an app with information about food pantries, backpack programs, community gardens, hot meals, and feeding sites at Guilford County Schools. “The app is location-based, so it will not only show you the food pantry closest to you, but the hours that it is open, and what requirements might be needed,” Vierling said. “We also have emergency assistance, financial assistance, and shelters as resources on the app.”

Vierling said he’s seeing benefits like the earned income tax credit, expanded child tax payments, and pandemic EBT (P-EBT) making a difference for High Point families, along with the work GHPFA is doing. The organization has work teams that take on the food insecurity issue such as food access, education, nutrition, urban agriculture, seniors, and policy.

Like Ready for School, Ready for Life (Ready Ready), GHPFA focuses on connecting programs, resources, and community members to break down silos and solve problems. “Our work overlaps with Ready Ready and we’re happy to be partners. We recently had some conversations about the work Ready Ready is doing with pediatric offices. It’s so important to recognize the impact of food insecurity on health,” Vierling said. “One of the things I love about Ready Ready is that it’s trying to wrap these services around people, around young children, and get them ready for school and ready for life.”

Vierling says GHPFA’s approach can be summed up in three words: empower, unify, and sustain. “We give people a voice who’ve never had one. We bring people together and give them the tools they need to solve problems,” he said. “We create sustainability through food education, urban agriculture, and leadership programs.”